brut nordwest
Theatre / Performance / Lecture World premiere In German and English / Duration: 90 minutes
{Who are you?} {Who judges?} {Who condemns?}

‘Who are you? Who are you really? Can you prove that you are who you are?’

Identity Cases moves the debates over identity politics into specific media court settings. How are identity cases negotiated in court, in theatre, and in the social networks? Who judges or even condemns? Who feels in the right and what is justice? Identity Cases is a performance lecture and court game in several acts that shows one thing very clearly: Identity is never a done deal. 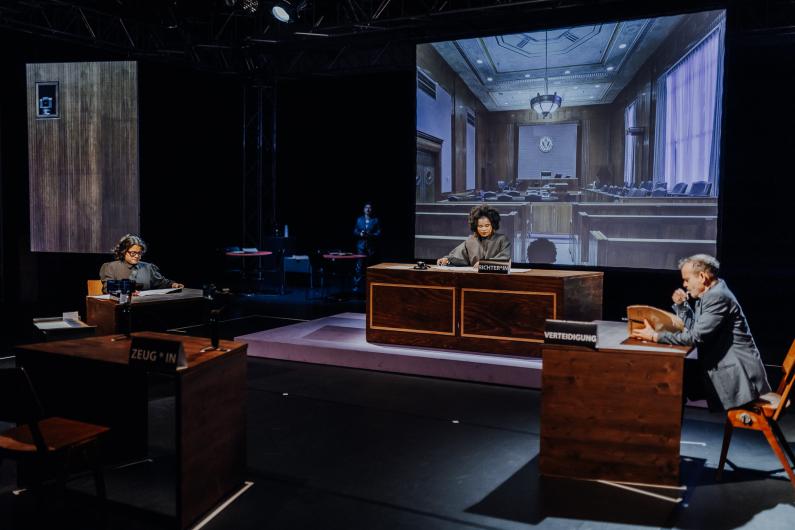 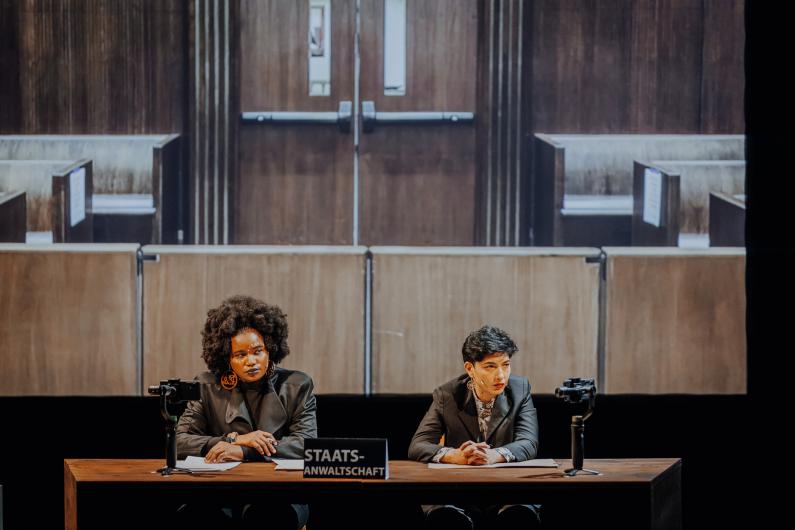 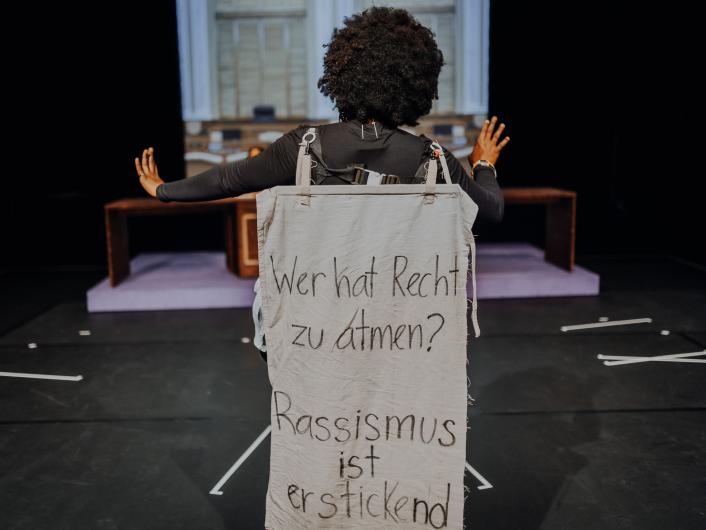 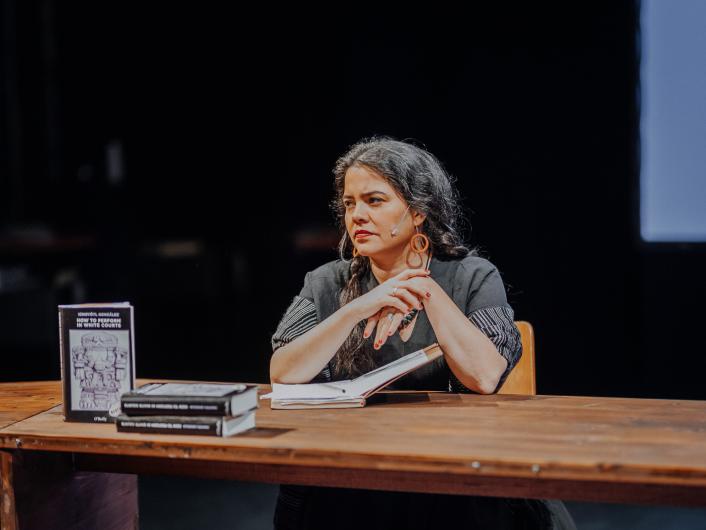 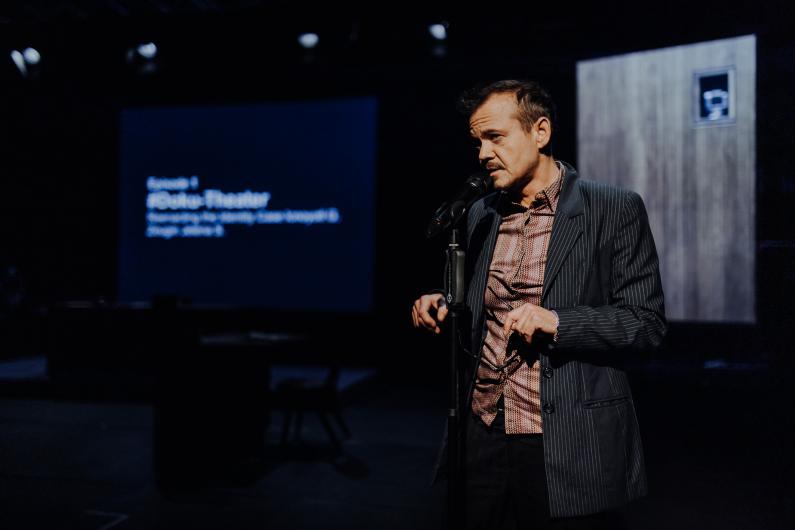 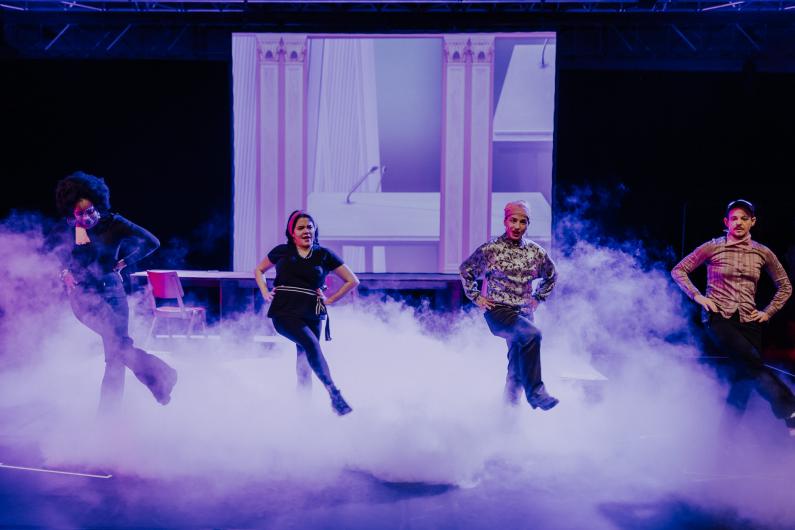 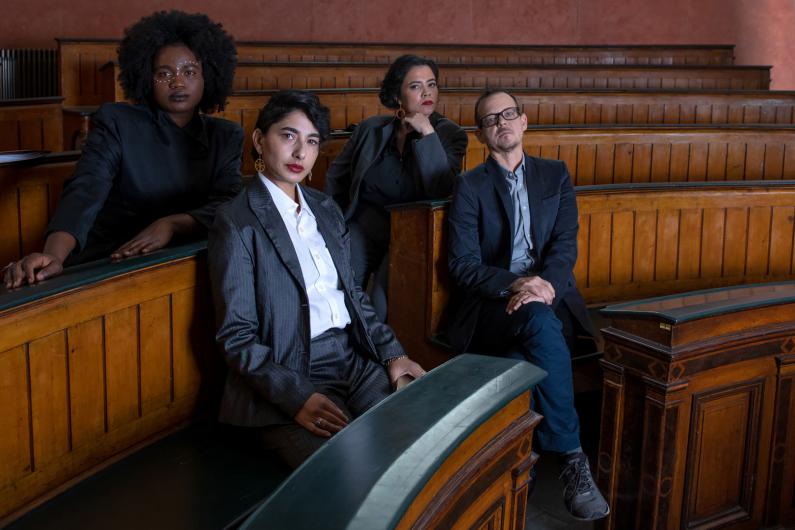 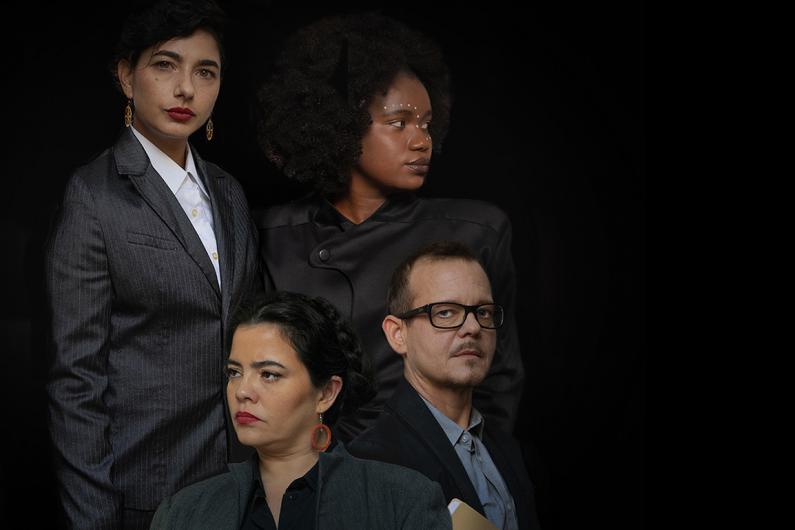 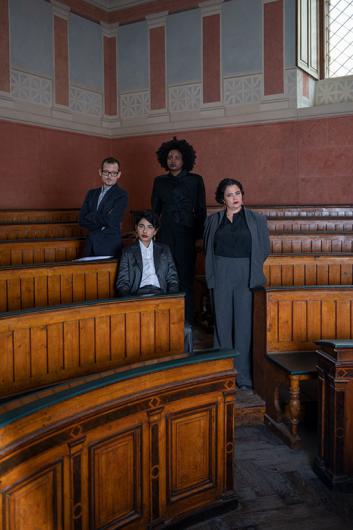 Initiated by Gin Müller, JUSTITIA!  is a four-year research project by Verein zur Förderung der Bewegungsfreiheit that deals with the relationships between theatre and court as well as between law and justice in different performances and media formats, workshops, and lectures. In autumn 2022, the international performers and activists Edwarda Gurrola, Mariama Nzinga Diallo, Sandra Selimović, and Gin Müller will delve into the main topic of the first year with their multimedia performance Identity Cases at brut.

Proceedings in Identity Cases revolve around fiercely contested topics of identity politics. Inspired by cultural scientist and writer Mithu Sanyal’s novel Identitti and current public debates, the court presents itself as a theatrical performance, as a media court game of embodied trans-identities. Performing in such contexts entails the need to create a credible narrative about one’s own identity. Plaintiffs, lawyers, defendants, witnesses, judges, and spectators all play their own roles in the fight for a fair performative judgment.

Gin Müller is a director, theatre scholar, performer and queer ar/ctivist. Gin’s pieces negotiate activist and political topics as well as collective forms of collaboration both on and off the stage.

Sandra Selimović is an actress, director, rapper, and Roma activist. She is a co-founder of the feminist Roma theatre association Romano Svato and a fighter for queer and women’s rights within the Roma community.

Mariama Nzinga Diallo is an activist and Pan-Africanist, photographer, artist, and performer. She studied contextual painting at the Academy of Fine Arts Vienna. She is currently involved in helping Black people who have fled from Ukraine.

Edwarda Gurrola is an actress in theatre and film. Since her childhood, she has appeared in various TV formats and telenovelas. In 2015, she was nominated for an Ariel, Mexico’s film award, as Best Actress in a Leading Role.

Natalie Ananda Assmann is a freelance artist, theatre-maker, curator and performer. Her work is located at the intersection of theatrical intervention in public spaces and queer-feminist, anti-fascist image production.

Accompanying the performance is a  program with workshops, panels and discussions.

Sat, November 26th, 10:00 pm / Location: brut nordwest
Authentically Plastic
Concert & DJ Set
Info: Admission free with ticket for one of the performances of JUSTITIA! Identity Cases / without a ticket to the performance: Pay as you wish (Recommendation: €9)

A co-production by Verein zur Förderung der Bewegungsfreiheit and brut Wien. With the kind support of the City of Vienna’s Department of Cultural Affairs.

There is an accompanying program before and after the performances with workshops, panels, discussions and music.

About radical tenderness, forms of solidarity and identity politics