Today, in the Anthropocene, there seems to be nothing left untouched by humans. Dwindling species, thawing permafrost, landscapes of toxic trash: human impact appears all-encompassing. But the reverse is also true: nothing we get in touch with leaves us unchanged. It is this mutual interaction Jasmin Hoffer and Oleg Soulimenko scrutinise in BEAUTY OF MESS, TRASH AND UNKNOWN DESIRES. They deal with the entanglements of human bodies and objects and with the vitality of matter.

Jasmin Hoffer and Oleg Soulimenko break out of the mundane approach to things. In their performance, everything can become matter, everything is constantly subject to change. Some things are fished from the trash, some are factory-fresh and some stem from the body as such. The performers build manifold relationships to these objects, sometimes distant, sometimes intimate – they perceive them not just as functional and subordinate, but as subjects themselves. They experiment with causalities, create rituals, put the objects in order and fantasise about a future in which the things we will leave behind will provide intelligence about what may have been the meaning of the human species.

Jasmin Hoffer and Oleg Soulimenko have been working together for a couple of years, creating performances in which they examine potential relationships between the human body and other forms of matter. Jasmin Hoffer is a dancer, choreographer and performance artist, who teaches contemporary dance. Oleg Soulimenko is a performance artist and choreographer. They both live and work in Vienna, and their performances have been presented at a variety of venues all over the world. Most recently, they showed their projects LOSS (2017) and SWIMMING POOL (2018) at brut.

“With great seriousness and in peaceful neighborhood they work on a poetry, which things seem to whisper to them. The camera is very close, revealing details and working out nuances. Until a surprisingly dramatic ending. Conclusion: an excellent work from the lockdown-shaken free scene." (Helmut Ploebst, Der Standard)

Performance artist Oleg Soulimenko invites the audience to join him for an atmospheric trip into the Viennese Jörgerbad. In the eerily empty, quiet bath, the audience will roam through a landscape of performance and water. An installation spanning the entire bath will push the limits of perception, grabbing visitors with a very special allure.
brut Tipp 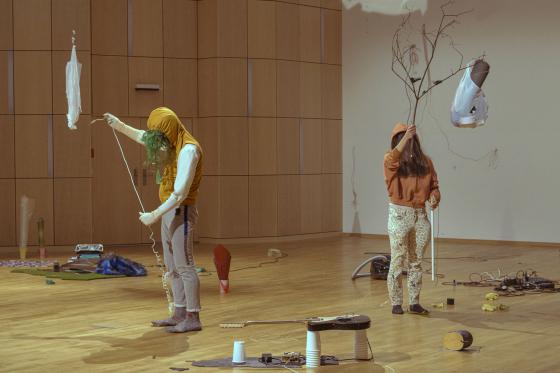 NEW ART ON ... LINE ALL SUMMER LONG: Today, in the Anthropocene, there seems to be nothing left untouched by humans. Dwindling species, thawing permafrost, landscapes of toxic trash: human impact appears all-encompassing. But the reverse is also true: nothing we get in touch with leaves us unchanged. (VIDEO)