‘Simon Mayer left the Upper Austrian village of Andorf to whirl around the world of contemporary dance. Today, he is one of the trendiest performers, touring Europe with his pieces’ (Wiener Zeitung). The choreographer, dancer and musician’s new project will be first presented at brut this autumn. In Bones & Wires, Simon Mayer focuses on several layers of being connected: the connection between humans and humans, humans and nature, and humans and technology/robotics. The piece revolves around theories and practices on collective consciousness, telepathy and interdependencies, asking whether or not robots and new technologies can be part of this potential connectedness. 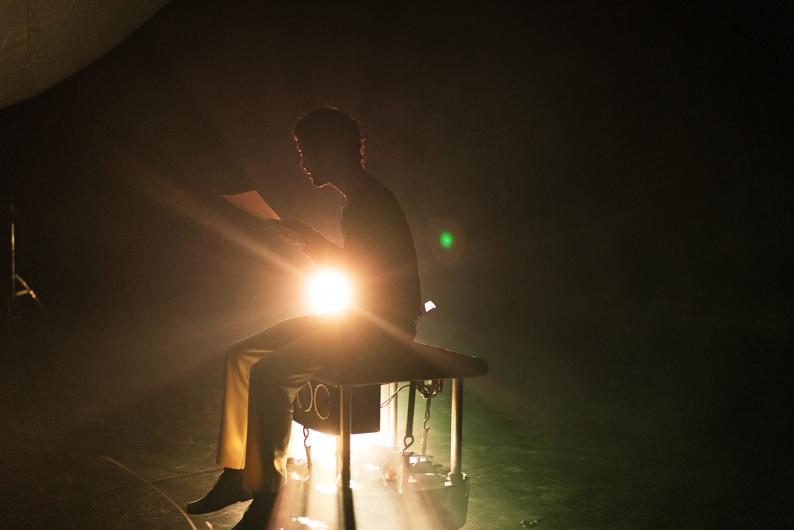 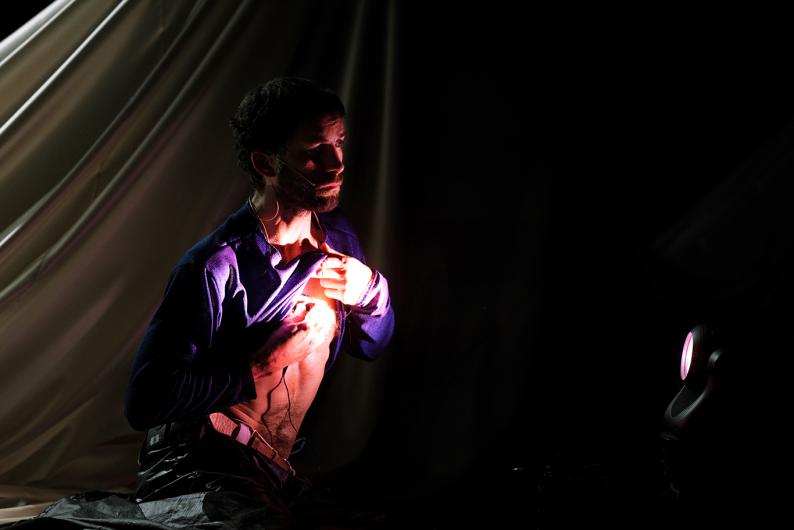 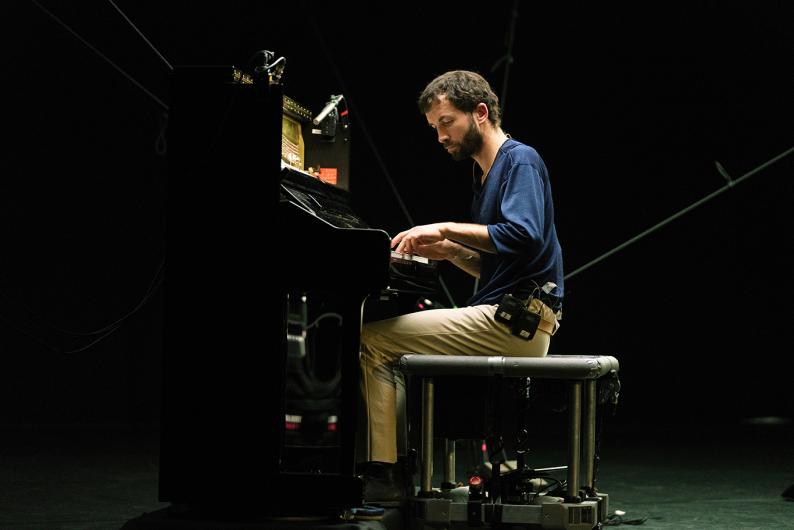 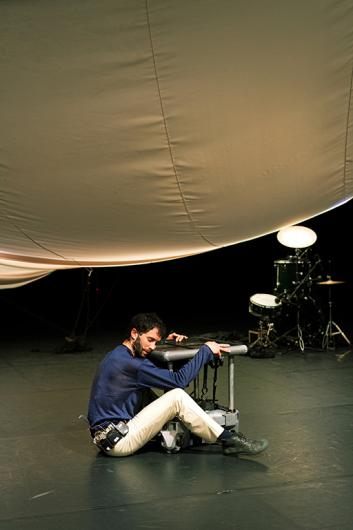 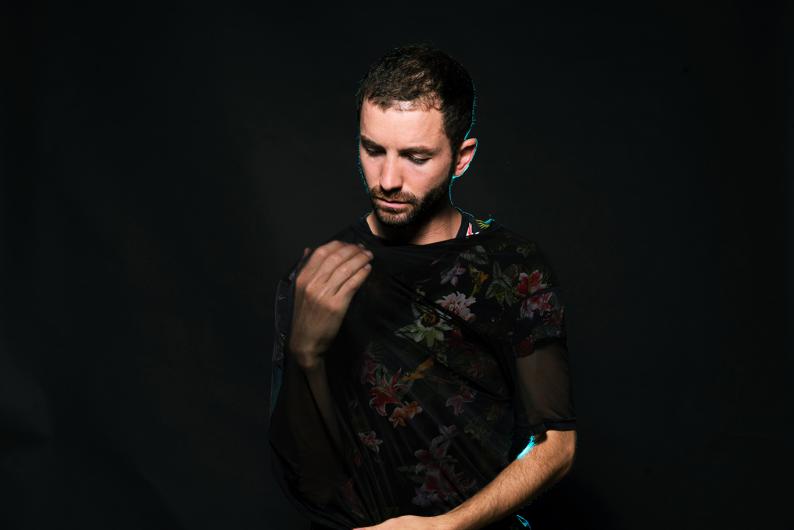 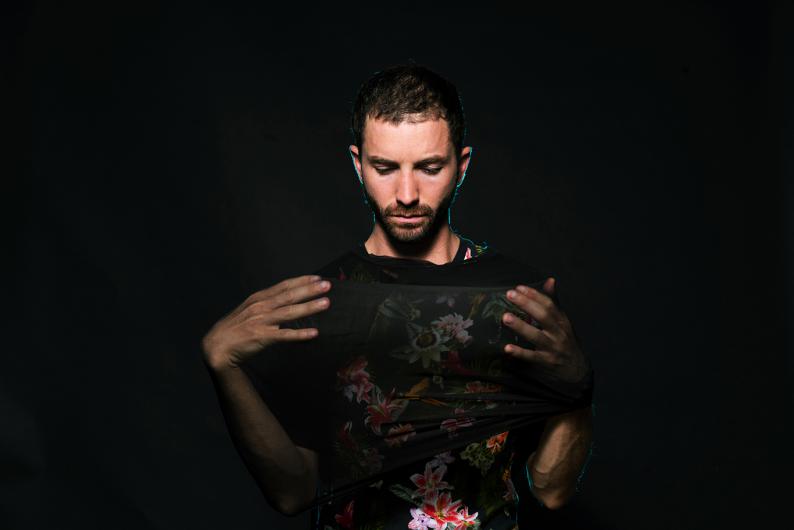 Together with light designer Jan Fedinger, sound designer Moritz Nahold and multimedia designer Dominik Strzelec, Simon Mayer breathes a soul into various objects on stage. Initiating dialogues with things like a piano stool or a drum set, he tries to become part of a shared connection and collective consciousness. Simon Mayer reveals the various layers of visible and invisible connections, once again shedding light on a perspective that contrasts connectedness with inner and outer divide. Unobtrusively, the audience on this journey is turned into an active part of this co-creation that blurs the lines between stage and auditorium.

Bones & Wires is a total art work made of performance, music, sound and light by Simon Mayer, created in close artistic collaboration with Moritz Nahold and Jan Fedinger.

Simon Mayer is a performer, choreographer, and musician. He studied at the Vienna State Opera’s ballet school and the Performing Arts, Research and Training Studios (P.A.R.T.S.) in Brussels and he was a member of the Vienna State Opera Ballet. After participating in productions by the likes of Anne Teresa de Keersmaeker/ROSAS, Wim Vandekeybus and Zita Swoon as a dancer, choreographer and musician, he has been a recurring guest in the brut programme with his internationally touring productions SunBengSitting, Sons of Sissy, Being Moved, and Oh Magic. In addition to his artistic work, Simon Mayer is a curator, workshop, and seminar teacher for contemporary, community, and traditional dance and a guest lecturer at the Music and Arts University of the City of Vienna and the HFMDK in Frankfurt.

Jan Fedinger is a visual artist and designer whose oeuvre includes performative installations and installative performances, lighting design, photography, drawing and product design. He is the head of the modular synthesizer projects Invader_RUI and 404_instruments and has collaborated with Jefta van Dinther, Jan Martens, TG Schwalbe, Daniel Linehan, Dennis Deter, Aïna Alegré and Alban Richard, among others.

The work of sound artist and composer Moritz Nahold (* 1992) focuses on digitally alienated aesthetics, diverse electroacoustic methods and multi-channel compositional techniques in specialized environments for performance, dance, theater, installations and film. In addition to releases on Ventil Records and Denovali, he has worked with Anna Bergmann, God's Entertainment, Peter Kutin, Akemi Takeya, among others.

Dominik Strzelec (*1982) is a design researcher, visual artist and musician. He studied philosophy and architecture in Warsaw, before graduating at die Angewandte in Vienna. He has been teaching in various academic institutions since 2008 (Academy of Fine Arts and Design in Bratislava, Academy of Fine Arts in Vienna, die Angewandte) and conducted workshops internationally (generative design, physical computing). He collaborated with several architectural offices and has been recognized in the generative art community as echoechonoisenoise. As a co-founder of oddEquipment OG, he received AWS Impulse grant for the year 2016. His current work spans between interactive visual arts and robotics.

"Choreographer Simon Mayer is the shaman of the local dance scene, his wild, ecstatic evenings show which strength lies in the body, but also in the collective experience of a visit to the theater." (Der Standard)

"The Upper Austrian musician, dancer and choreographer Simon Mayer is currently one of the most exciting stage artists the country has. [...] What Mayer is looking for is the dialogue between cultures, the productive confrontation of tradition and modernity." (Furche)

"Mayer, a classically trained dancer and performance artist, commutes in his work between the genres as well as between the cultural worlds that shaped him: from rural folk culture to his time in the Vienna State Ballet to Anne Teresa De Keersmaeker, with whom he did several productions before he made a name for himself as a solo artist in the international dance scene." (Ö1)

"The regional as well as the global access to his performances has made Mayer the darling of the local scene." (Falter)

A coproduction by brut Wien and Tanz ist.
With the kind support of the Department of Culture of the City of Vienna and the Federal Ministry for Art, Culture, Public Service and Sport.