Interview with Jaskaran Anand: Dance is a liberating force!

Jaskaran Anand’s performance "Around L-INKED" is part of this year’s imagetanz festival edition. In an interview he talks about his project, the role gender and sexuality play in his artistic work and what dance really means to him.
imagetanz 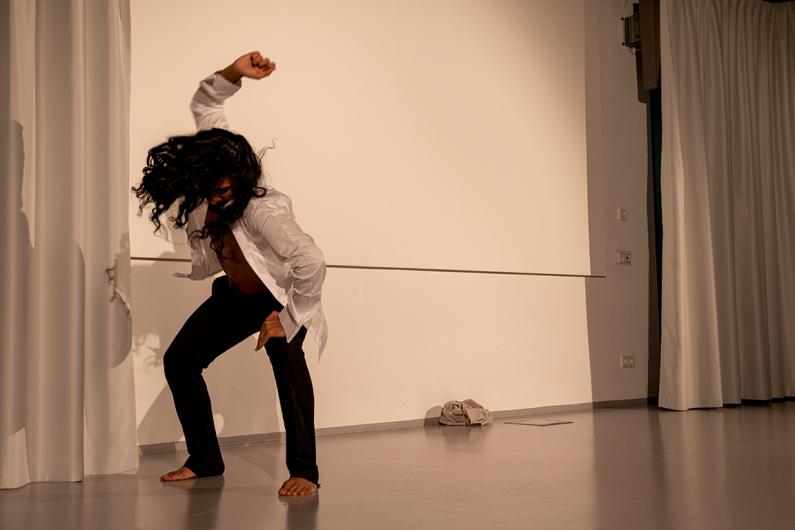 The starting point of your work are labels – what role do they play in the context of gender and sexuality?
Knowledge doesn’t do harm to anyone, ignorance does – similarly, the issue is not labels, the issue is how we define our experiences using those labels and somehow end up normalizing the essence of the experience. I believe that labels sometimes act as limiting factors in experiencing and perceiving the diversified singularity present in the concept of gender and sexuality. It is not that they themselves in nature are restricted, but I suspect that the knowledge one has in defining one’s experiences using only the collection of “correct” words is never enough – sometimes, it is hard to segregate the feeling one has from the word and what it actually means for the other person who is not an expert in that spoken language.
For example, when one is experiencing a feeling that falls in a particular category which one doesn’t feel associated with – neither during their lifetime experience nor seeing it happening in the future; it triggers a certain kind of protagonist who is trained to think in these categories. It works like inked links: you live a certain gender, and certain sexuality because of different factors in your life. And these linked ink(s) have cultural, traditional and social influences that are specifically patriarchal. In this process, I feel that we may loose out on experiencing the diversified sexuality and gender present in ourself. And this why I say that they play a role of resistors.
There always are sub-parts of some larger sub-parts of some larger sub-parts of the sub-body. Somehow, I see and hear the gender concept itself is very dual-material based:  a sub-body representation which is grounded on the famous duality of masculinity and femininity, where there are two sexes and the diversification between them. Here, I believe originate some unconscious codes or labels which divide us in duality and restrict our witnessing of the spectrum which has no two opposite end-points.
In retrospect, I remember this thought already from my childhood – why is it male, female and the third gender (trans), why not “kinds of human beings”. Also felt it represented as some kind of a priority list within society: 1st Man, 2nd Woman, 3rd gender.

How did the performance develop?
I would say it went through a lot of rides – a research based on questions like “What is sexual energy? so to say”, “How are learnt seductions practiced?”, “What is the state of being in a trance with these topics?” or “Where can being in the state of trance without judgments be achieved?”. I started researching what this all really means to me. Does it only concern me or also most of the people – the others, so to say? What is the relationship with the movements of the body? Which learnt behaviours are present in the body that may signal, so to say, presence of belonging to a certain gender and certain sexuality?
The performance developed in its various perspectives of approach through various showings. This was followed by public/panel discussions during the last couple of years, conducting a survey and having socio-personal-emotional encounters.
The topic of physical intimacy has been astonishing for me since my childhood. In addition to that, I was fascinated by the Indian philosophy of Shiva Shakti/Adi Shakti or Ardhnarishvara (half-male-half-female embedded in a body); the Ying and Yang, dynamic and static, good and bad: these duality concepts that exist in defining the spectrum of singularity. This became sort of a research basis for exploring the text (based on conversations and thoughts) in the performance.
It was initiated as an improv-dance-theatre performance in 2016 because of a conversation with a friend, Sina Heiss. We were discussing my experiences in Austria and the relationship of that with India – regarding gendered-roles in society and the limitations of physical intimacy people seem to have – especially when it comes to certain gestures like looking into the eyes and talking, being touchy – so to say – and majorly, hugging. I found it astonishing that, even though the gestures were just out of humane intentions and not really sexual, what the other person “feels” to allow for them/her/him self mostly was dependent on the gender of my body, to dive in even if they feel like doing that same action but couldn’t because: she “had a boyfriend” or he “wasn’t gay” or they were “just friends”.
Then, in 2019, when I met Robert Steijn, who joined as a dramaturge for the project. We exchanged personal experiences and our movement practices. The movements arising from the “snake dance” of Shamanic rituals or the “Kundalini Energy” from the Yogic ritual were re/introduced.
During this time, I also realized that it is the pre-occupations between people that keep them from expressing intimacy towards each other, and that it is important to understand each other’s view with minimum effects of pre-occupations. So, the performance developed into a sort of interactive performance a video installation exploring the bodily desires between the learnt seductions and the moment of trance and how these may trigger instances where there is a certain body shaming that jumps in based on ideas of gendered and sexualized desires which are deeply engraved in the society.

What is your research based on?
My research is based on de/constructing the factors that constitute reality for a self. Diving deep into the varying emotionality's of the body – I am fascinated by the geo-political nature and extensive capabilities of human bodies. I research how the self of an individual guides itself through the knowledge and ignorance of the matter via the body it is present in.
Through the nature of spirituality, the psychological and neuroscientific understanding of the self and socio-political society, I research how we mark subjective and objective relationships within our body-minded brains. Further, how we deal with un/conscious muscle memory: memory that a body adapts due to the interaction, sensation and perception with other (in)visible objects present in an individual’s environment.
Furthermore, I explore factors in re-unification of the self via different body practices which may deepen layers of awareness and experiencing transcendence. I extend the research towards the influence on body representations via modern technological interfaces present in the society, especially digitalization.
In theoritcal references I combine the Indian philosophy of Advaita Vedanta, the concept of Avataar, the Ayurvedic concept of “Tridosha”, the neuroscientific hypothesis on the working of the Self by Antonio Damasio, Georg H. Mead’s psychological concepts of “True Self”- and “False Self”-identities and their relationship with the quantumn understanding of the matter.

What does dance mean to you?
The definition of dance has always been changing for me. It has always been a liberating force – it gives me freedom – freedom in the bodily expressions, freedom of exploring a language – which has a certain technique or rules, so to say. It makes me dive into a certain zone that makes my “me” revealed to myself and allows me to enjoy the “I” that I am made of.  It is a healing process, it helps connecting to higher vibrations of my self, it helps appreciating different kinds of bodies, understanding them, their impulses, the re/actions, and inter/intra-actions that happen all around in the world.
I heard somewhere that “everything that is moving is dancing”– it is a pure zone, so to say where one can enjoy the limits of the structural body and utilize them to extremes. Dance is also something that helps me learn a lot. A lot of patience, body dynamics, enjoying the depth of feeling emotions, moods related to that, thought processes and connecting with people. This is amplified when social dances/partnered work jumps in.
It makes me happy somehow – it is of course not always a “happy” instance: it can be physically tiring – not only in the training of the structural body, but also in the intensity of emotions that flow in the body. These rides of emotions and re/actions of the body make me happy. After every ride I come out “cleaner”, as there happen a lot of “clicks” within the organism where I reside.
It also opens the door for deeper understanding of the working of the human body, which includes the diversity present in a human psyche and the range/spectrum of feeling(s) of emotions.

The interview was given in January 2021. Due to the current situation, the performance cannot take place as a live version. Jaskaran Anand has developed a film version of his project, which will be presented as an online film premiere with Artist Talk at the imagetanz Festival in March.