Memory of stones opens the three-part series of talks Circular Ecologies: Three excursive explorations as talks by experts at different locations in Vienna, invited and moderated by director, choreographer and artist Claudia Bosse. The talks offer insight into the background and creation of her performance ORACLE and SACRIFICE in the woods, which will premiere in co-production with brut on May 8th 2022 in Vienna's Green Prater. In the first part of the series of talks, which will lead through the Natural History Museum, the aquatic ecologist, visual artist and sturgeon helper Christina Gruber will meet the head of the geological-paleontological department at the Natural History Museum Vienna, Mathias Harzhauser. 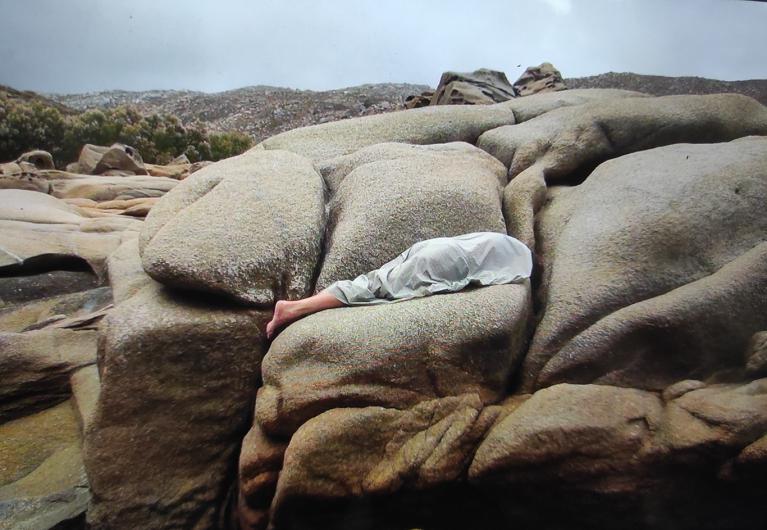 Applying ecological thinking means understanding that every act has consequences for the environment and everything is connected to everything else. Every action leaves traces in time. Things do not disappear, but take on a different shape, depending on the environment and climate. Mathias Harzhauser talks about landscapes under the earth and the time of stones, Christina Gruber demonstrates auditory stones in fish (otoliths) and in humans (otoconia): a dialogical reflection on 35 million years or more.

Claudia Bosse choreographer, director and artist, lives in Vienna and Berlin and is artistic director of theatercombinat. Her work focuses on different forms of violence, history and utopia. She thinks of her expansive choreographies in space as art works created by temporary communities, which incorporate myths, rituals, texts, language, choruses and objects. She has presented this (often chorus-like) reflective practice of bodies in space at festivals, museums, in architectural settings and in public spaces all over the world. Her artistic practice includes installations, theatre productions, choreographies of space and public interventions. As a researcher, she has also held many workshops and has lectured at several academies and universities. Since 2011, she has also been working on installational pieces in cooperation with archives and art collections. Most recently Claudia Bosse showed her first solo work ORACLE and SACRIFICE 1 oder die evakuierung der gegenwart in the Halle G of the Tanzquartier Wien and the last IDEAL PARADISE in Jakarta, which was also shown at the German Dance Platform in Essen. www.theatercombinat.com

Christina Gruber is a Vienna-based aquatic ecologist, visual artist, and sturgeon helper. Her work focuses on water and its ability to connect stories of diverse places and layers. In 2018, she co-published the artist book From Mud To Outer Space with Paula Cohen, set along major rivers. Through speculative narrative, they explore relationships between species, alternative forms of care, political resilience, and ecological pedagogy.

Mathias Harzhauser has been fascinated by fossils since his childhood, today he focuses on the paleogeography and climate of Eurasia over the last 30 million years. His research has led him to Tanzania, India, Iran, and Oman in the context of numerous third-party funded projects. Since 2004 he is head of the Geological-Paleontological Department at the Natural History Museum Vienna; since 2005 he is habilitated at the University of Graz and tries to give students a feeling for "geological" time.

A cooperation by theatercombinat, Naturhistorisches Museum Vienna and brut Vienna.