Quiet Matters is a series of short concerts and performances dedicated to our inner voice and subjects not usually addressed out loud – intimate, fragile things in times of shouting politicians and crying babies.

Quiet Matters is organised by Michikazu Matsune and Elizabeth Ward. 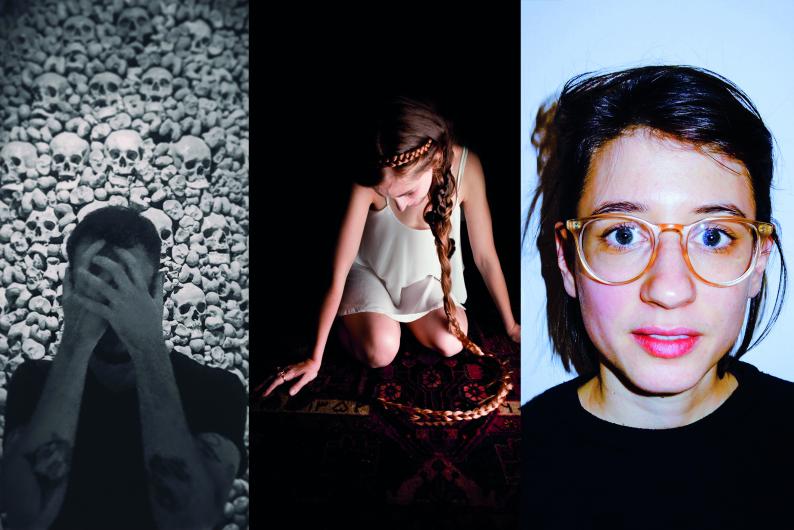 tackles short-lived art forms that pretend to sink deep into memory by occupying spaces or applying madness and alienation. She is a dancer and a movement/word-maker with versatile linguistics and a rich background in dance. At the moment, she is particularly interested in the functionality of dance and theatre and the concept of peace as well as the power to name poetic words of love. www.veza.at

is an artist who lives in Vienna. She has been working with Tiina Sööt under the name Sööt/Zeyringer since 2012, devising various performances including lonely lonely and Never Name the Shelf. Their most recent work Running Gag analyses power and gender relations in the realm of humour. Dorothea Zeyringer is currently working on a new project called Private View.

is a singer, a writer, a poet, a performer, but most of the time, YOMER is tired. Coming from Italy makes him the perfect mix between sadness, joy, humour and desperation. Electronic music and melancholy; pizza and beer; south and north: That’s YOMER for you.

Michikazu Matsune is an artist whose works blur the limits between performance, dance and visual art. In recent years, he has devised numerous solo performances in co-production with brut that have continued to tour the world, the most recent ones including For Now (2017), Goodbye (2016) and Dance, If You Want to Enter My Country! (2015). Matsune has organised and curated group exhibitions and performance events, including Homesick Festival (2017), Global Citizen (2016), Towards the other side of the world and Face Forward (2015).

Elizabeth Ward is a dancer and choreographer currently living in Vienna. Recent years saw her working on co-operative participatory art projects such as Capitalism as We Live It! with visual artists Liv Strand and Andrea Creutz, Spirit Building Dance/Floor! with Astrid Noacks Atelier and the Anti Fascist Ballet School with Magdalena Chowaneic. During her time in New York, she organised a number of roof-top performances (to be watched from the High Line) for the now closed EYE-HEART GALLERY.

short concerts and performances following  All Together