j_e_n_g_a – The Movie is a multi-lingual dance-film in which Tanja Erhart, her two crutches and Katharina Senk explore the juicyness of pleasure, interdependence and intersectional feminism in multi-sensorial perspectives. The film contains interactive parts in which the viewers have options to choose from and to guide the film while diving into their very own pleasure feelings.
be spectACTive! New Art on ... line

In their dance performance j_e_n_g_a, three-legged Tanja Erhart and two-legged Katharina Senk are all about pleasure: as a radical interface in the discourse between disability and feminism and as a delightful resource of movement in interaction with Tanja’s crutches. Those two crutches, jointly with the two dancers and the audience, create a multi-sensory game that makes us feel what interdependence means while at the same time bringing out the pleasure of joint radical movement.

Tanja Erhart, London-based Austrian, defines herself as a crip – i.e. disabled and chronically ill – dancer and cultural anthropologist. She performed worldwide in pieces by Claire Cunningham, Michael Turinsky, the Candoco Dance Company and many more. Currently, Tanja is exploring the movement languages of her three different body minds: with her wheel-chair, with one leg, or with three legs a.k.a. with crutches. She is also discovering the accessibility and pleasure activist in her as she tirelessly engages in discussions on dance, ableism, access and care.

Katharina Senk is an Austrian dance artist who lives in Vienna. She performed in pieces by artists of the likes of Doris Uhlich, Florentina Holzinger and Georg Blaschke. In her art, Katharina works to combine her interests in (post-)humanism, feminism and social justice with her knowledge in the fields of dance, movement and martial arts. In collaborations with her colleague Tanja Erhart, she is dedicated to exploring sensual dance practices with “(assistive) objects”. 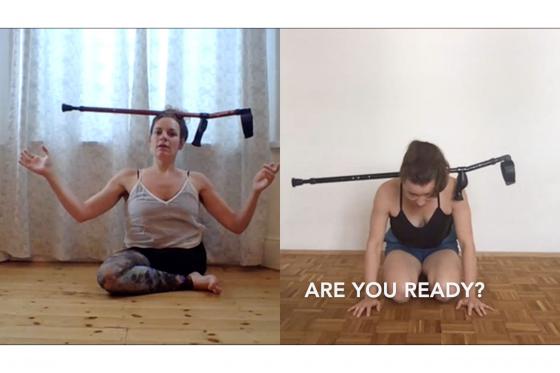 While Katahrina Senk is in Vienna and Tanja Erhart in London, they came up with an idea on how to play a game via skype. "CROSS_BORDER_BALANCE – A GAME!" was born and everyone is invited to play.