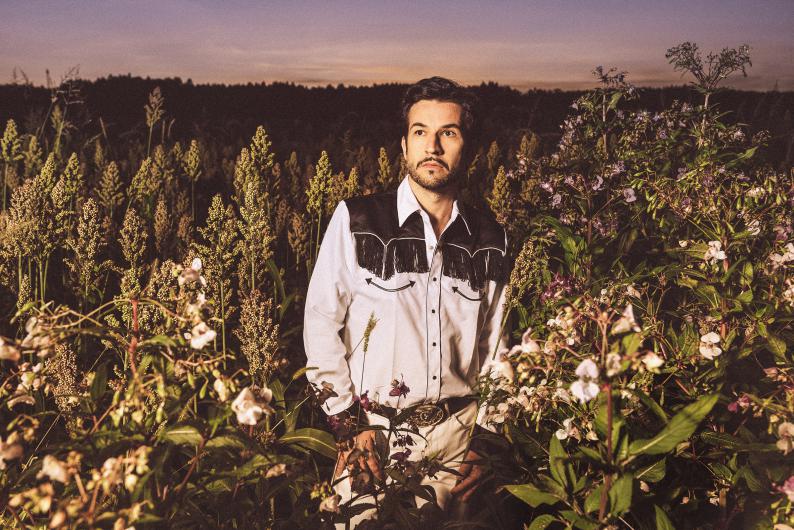 This new matter of musician Christian Fuchs’s heart is called Black Palms Orchestra and plans to sweep the dust off of traditional musical styles such as rock’n’roll, country and blues using electronic sounds and the musical potential of permanently alternating participants. Inspired by sound tracks of TV shows like True Detective or Twin Peaks, the Black Palms Orchestra excites its audiences with gloomy, energetic and lucid sounds.

Christian Fuchs uses yearning as the key emotion and basis for his musical work. And that’s not just yearning as a formality far away from earthy mock authenticity, but also the yearning to give birth to new songs with fantastic musicians and friends, free of rigid band structures. Fuchs, who used to rock the stages with bands such as Fetish 69, Bunny Lake and Neigungsgruppe Sex, Gewalt und Gute Laune, uses the Black Palms Orchestra to create a new universe. It is joined by musicians Ankathie Koi (Fijuka), Anna Attar (Monsterheart) and Oliver Welter (Naked Lunch) and some of Austria’s best photographers, video directors and artists. At brut, the Black Palms Orchestra will present its first album Sad Moon Rising for the first and only time with all artists involved and thereby initiate the new concert season.

“Fuchs, a musician and critic (Fetish 69, Bunny Lake, Neigungsgruppe), has created a harmonious, at times no less than beautiful soundtrack album for sentimental urban romantics. ‘Sad Moon Rising’ – that sounds like dark country elements, ‘True Detective’-style marshlands, heavy pop folk or the more recent works of Bela B. What it really is is an album full of noir soundtrack charm, movie nostalgia and boppy electric music.” Profil

“The Black Palms Orchestra is swinging back and forth between darkness and light, gloss and trash. It gives Fuchs the opportunity to live out several obsessions and preferences at once. While the songs of the Orchestra’s debut album ‘Sad Moon Rising’ sound a little bit like Hollywood and Lana Del Ray, the arrangements are almost as epic as film scores. There is no lack of emotion and pathos, but a shimmer of self-irony remains amidst the gravity. And why not go borderline once in a while?” Falter

The ticket is valid for both events on 1 October: Black Palms Orchestra and Social Muscle Club!