Gesellschaftsspiele: The Art of Assembly II. Assemblies as Backbones of Social Movements

The General Assembly has been at the core of many social movements during the last decade: A zone of gathering, of building community, of experimenting with the way democracy can function. A space not only for trying out but living a different kind of decision making. Art historian Julia Ramírez-Blanco (Barcelona) just finished a book on the Spanish 15M movement, Oliver Ressler (Vienna) is one of the main documentarists of worldwide social mobilizations since many years. In the second edition of Gesellschaftsspiele – The Art of Assembly they reflect the crucial role of collective decision making for developing political alternatives. 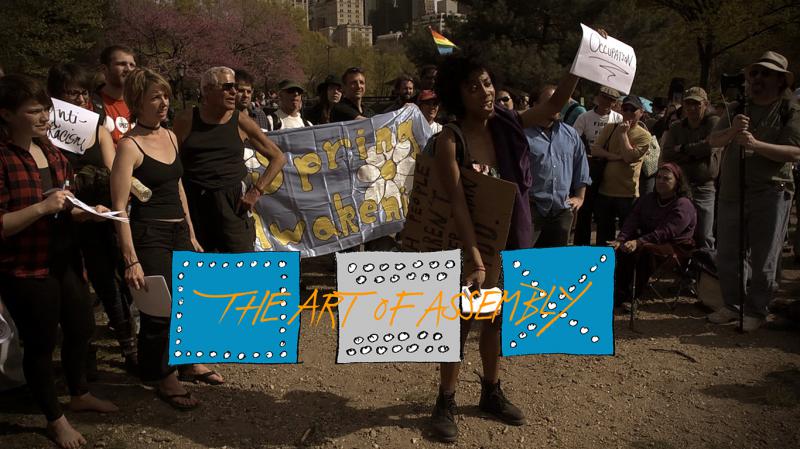 Julia Ramírez-Blanco is art historian and lecturer in Barcelona University. Author of the book Artistic Utopias of Revolt, she researches the intersections between art, activism and utopian practice. She is currently finishing a book on the aesthetics and politics of the Spanish 15M movement. Ramírez-Blanco has lectured extensively in places such as Princeton or Columbia University, the Sao Paulo Art Museum or the Reina Sofía Museum.

Oliver Ressler (Vienna) produces installations, projects in public space, and films on economics, democracy, racism, climate disruption, forms of resistance and social alternatives. He has completed thirty-five films, whereas several of them are based on filming assemblies. His work has been exhibited in galleries, museums and biennales all over the world. Currently he works on a research project on the climate justice movement, Barricading the Ice Sheets.

Florian Malzacher is a curator, dramaturg and writer. 2013-2017 he was artistic director of Impulse Theater Festival (Cologne, Dusseldorf and Mulheim/Ruhr), and 2006 - 2012 co-programmer of the multidisciplinary arts festival steirischer herbst (Graz). He (co-)curated e.g. the 4th and 5th International Summer Academy (Mousonturm Frankfurt, 2002 and 2004), “Dictionary of War” (2006/07), “Truth is concrete” (Graz, 2012), “Artist Organisations International” (HAU Berlin, 2015), “Appropriations” (Ethnological Museum Berlin, 2014), “Sense of Possibility” on the occasion of the 100th anniversary of the revolution (St. Petersburg, 2017), “Training for the Future” (Ruhrtriennale 2018/19 with Jonas Staal), “After Supervising the Machinery” (2020). As a dramaturge he worked with artists like Rimini Protokoll (DE), Lola Arias (ARG), Mariano Pensotti (ARG), and Nature Theater of Oklahoma (USA). Florian Malzacher has edited and written numerous essays and books on theatre and performance and on the relationship between art and politics. His latest publications include Gesellschaftsspiele. Politisches Theater heute im Alexander Verlag Berlin. florianmalzacher.tumblr.com

It matters that as bodies we arrive together in public, that we are assembling in public; we are coming together as bodies in alliance in the street and in the square. […] So this is a politics of the public body, the requirements of the body, its movement and voice. […] We sit and stand and move and speak, as we can, as the popular will, the one that electoral democracy has forgotten and abandoned. But we are here, and remain here, enacting the phrase, “we the people.”