It runs from Mariahilfer Straße all the way to Lerchenfelder Straße, crossing the heart of Vienna’s 7th district: Zieglergasse. It has been a year now that brut started showing new pieces from choreography and performance here at studio brut in building no. 25, so it’s high time to get to know the building, the street, the quarter and most importantly its residents better during this new season. Extended chats among neighbours will allow Pia Hierzegger and the brut audience to glimpse behind the façades of Zieglergasse and to meet its inhabitants and their stories. 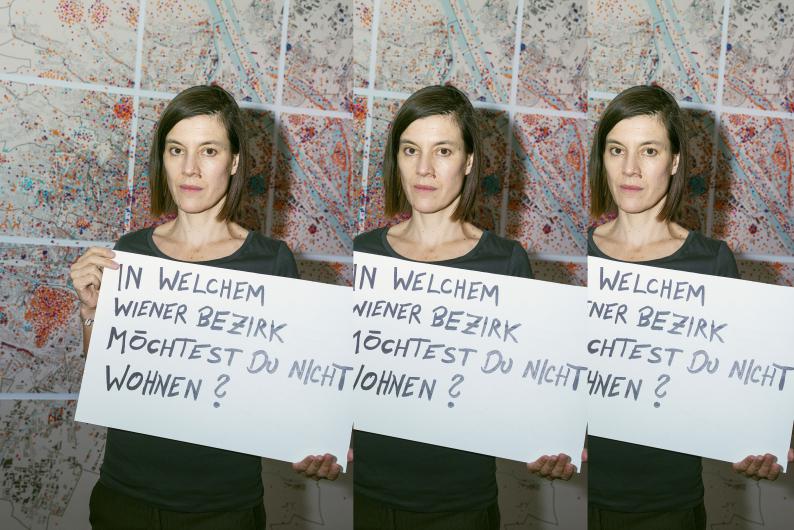 GUESTS – a concentrated talkshow with Pia Hierzegger and guests

is managing director of „Golden Girls Filmproduktion“ based at Seidengasse 15.

Arash T. Riahi was born in Iran in 1972 and has lived in Austria since 1982. After studying film and humanities, he was a freelancer for the ORF programmes Nitebox, Kultur aktuell and Kunst-Stücke from 1995 to 2002. In 1997 he founded the “Golden Girl Filmproduktion” together with Geza Horvat, Kristian Davidek and Raphael Barth. The cinema documentary “The Souvenirs of Mr. X” was his first feature-length film. It was followed by the cinema documentary “Exile Family Movie” which won several international awards. His first feature film “For A Moment, Freedom” from 2008 received 30 international prices and was the official Austrian candidate for the Foreign Language Film Oscar in 2010. “Golden Girls” produced among others “The Migrumpies” by Arman T. Riahi (2017), “COPS” by István (2018) and “Born in Evin” by Maryam Zaree (2019).

From 1902 the Wiener Arbeiter Turnverein WAT Neubau used the premises of today’s studio brut as a gymnasium.

Lotte Berthold was born in Vienna in 1934 and attended the Upper Secondary School for Commercial Women’s Professions in Herbststraße. The trained tailor has been a member of WAT Neubau since 1951 and attends a weekly music gymnastic course at the elementary school in Zieglergasse 21.

is the owner of the Afghan restaurant Noosh in Zieglergasse 29.

Khaled Khoshdel was born in Kabul (Afghanistan) in 1976. In 1993 he fled Afghanistan and after almost exactly one year he happened to land in Vienna in spring 1994, where he still lives today. In the summer of 2012 he opened Noosh, the first Afghan restaurant in Vienna. Once an insider tip, Noosh is now established in many different circles. Khaled Khoshdel also works as an artist. Among other things he designed the ceiling lamps in the restaurant, which he calls “Tears of Kabul” and which also represent the logo of the restaurant.

Helga Rigler, born in Slovenia and raised in Bosnia, came to Vienna at the age of 17. She learned to cook and knew what she wanted: Since 1980 she has been the landlady of the restaurant Neubauschenke. In between she successfully ran a restaurant in Fort Myers, Florida, for seven years and became well known with her strudel shows. Meanwhile she is active again in the Neubauschenke and swings the cooking spoons as often as possible. The traditional cuisine with seasonal specialities is her passion. Helga Rigler lives at Zieglergasse 25.

One guest, two tables, 110 questions. The regular brut series GUESTS – A Concentrated Talk Show features Pia Hierzegger of Theater im Bahnhof as a genial but merciless interviewer probing different Vienna personalities one after the other in intimate one-on-one conversations. The questions, drawn at random, may range from the current political situation to intimate personal issues. Their purpose is not to explain, expose or denounce. Instead, the audience should be given insights into the guests’ worlds and the country’s mentality. And yet, sometimes there might be a point where unpleasant follow-up questions are in order… Thus unfolds a vivid selection of greatly varying insights, views and perspectives during each show.

Graz-based Theater im Bahnhof makes contemporary theatre for the people and deals with the Austrian identity between tradition and pop culture. Austria’s largest professional but independent theatre company has regularly been featured in brut’s programming.

A co-production of Theater im Bahnhof and brut Wien. With the kind support of the City of Graz’s cultural office, the Styrian Provincial Government’s Department of Cultural Affairs and the Austrian Federal Chancellor’s Office.