A new Uni-Ferkelei performance is foreshadowed. Something big is evolving in the intestines. At the Centre for Public Health at the Medical University of Vienna, the researchers Lucie Strecker und Klaus Spiess and the Viennese performance artist Oleg Soulimenko will take the audience with them on their search for an underestimated power within our bodies – the microbiome. The political macrostructure of capitalism is sabotaged at a biological micro level. 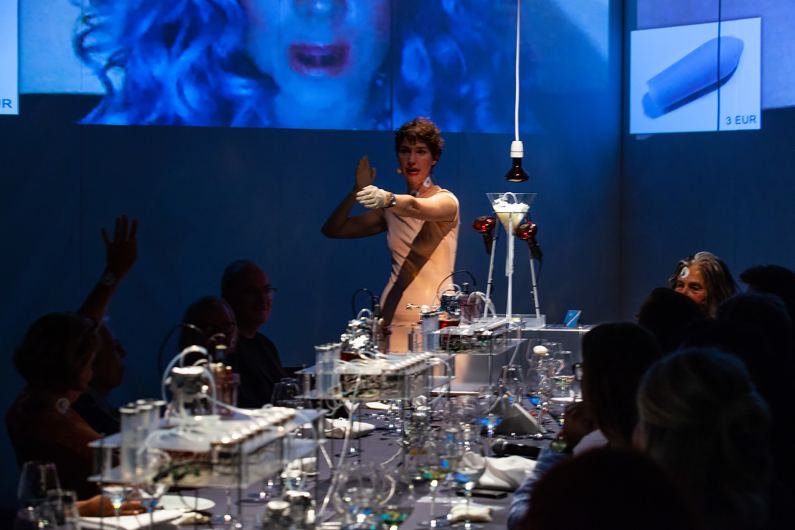 This event is already booked out.

The microbiome, the sum total of all microorganisms living in the human body, mainly colonises the intestine, lives in a symbiotic relationship with humans and thus ensures our survival. It has, however, been corrupted by the food forced on us by large industrial companies. The resulting changes are the central topic of Mikrovoluta.

Deep down in the cellar of the Hygiene Institute, a molecular agent is isolated, examined and applied. Based on a ritual taken from Kingdom by Lars von Trier, academic texts on the capitalist relationship between nature and culture are recited until these increasingly grotesque sounds start changing the acid content of the speakers’ saliva. This oral flora produced by the process of speaking is harvested, grown in a bioreactor and trained to become anti-capitalist. This enriched culture is meant to act as an agent contained in a suppository, serving the purpose of breaking the metabolism of the corrupted gut flora, colonising the intestines of the audience, thus sabotaging their addiction to commercial goods – a revolution which has its origin in the gut.

The new Uni-Ferkelei (obscenity at the university), which refers to an action entitled “Art and Revolution” from 1968, is a foretaste of the topics which will be addressed at the Applied Microperformativity: Live Arts for a Radical Socio Economic Turn Conference, which investigates the aesthetic, epistemological and political potential of the concept of microperformativity. The Conference, which will include an exhibition, a symposium and interventions, will be held from 10 to 19 December at the AIL – Angewandte Innovation Laboratory.

The event is part of the international Leonardo LASER Art&Science Talks.