Open letter addressing the current situation of brut at Künstlerhaus 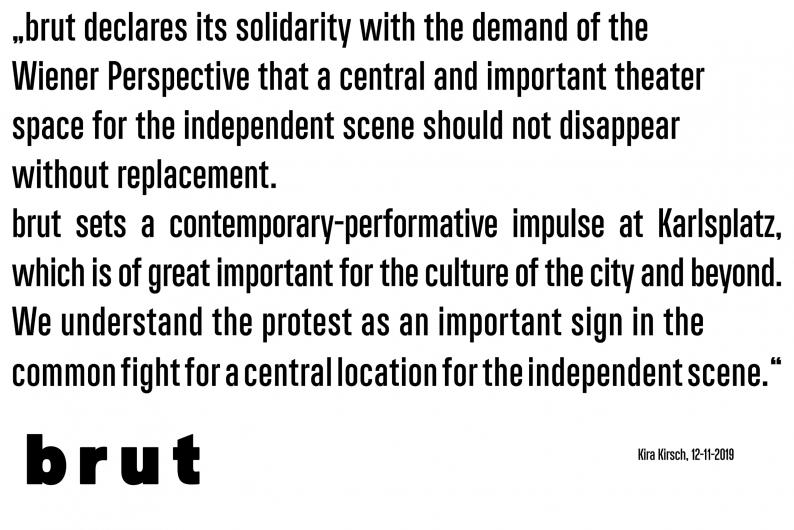 Kira Kirsch about the press conference of the Wiener Perspektive on 12.11.2019 in front of the Künstlerhaus on Karlsplatz.

The situation of brut at Künstlerhaus has been featured in the media several times since the beginning of this season. During the last few days in particular, a number of questions have arisen not just as to whether brut will remain at the Künstlerhaus, but concerning its future altogether. In this open letter, we would like to comment on the current situation in detail and at some length. This is necessary in order to give an adequate overview of the complex circumstances and the process brut is currently involved in.

To start with, let’s point out very briefly: brut as an internationally active co-production theatre in Vienna will continue to have its own venue. We have successfully fought for a pledge to this effect by the city’s cultural councillor, Veronica Kaup-Hasler.

To recap: In 2016, the appearance of the Haselsteiner Familien-Privatstiftung (the private foundation of the Haselsteiner family) brought about a change of owners for the Künstlerhaus, which had until then been the sole property of the Gesellschaft bildender Künstlerinnen und Künstler Österreichs (the association of Austria’s visual artists). The ongoing overall reconstruction that resulted from this new ownership situation will also affect the future exploitation of the Künstlerhaus. In fact, Albertina Modern, the Gesellschaft bildender Künstlerinnen und Künstler Österreichs, the Stadtkino cinema and brut are to share the premises once the reconstruction is completed. Also, a new pub garden will be installed on the square in front of brut. This means that the post-reconstruction Künstlerhaus will not be the same as the Künstlerhaus of the past decades. In particular, the conditions of running the venue as a theatre will change dramatically. Is has yet to be determined whether those new conditions will allow brut to continue its regular theatre operation. The Künstlerhaus is not only a place of symbolic importance but also a place the entire independent scene feels a connection with—a connection we share. This is why it has always been our goal to return to the Künstlerhaus after the reconstruction, albeit only under conditions that really meet the needs and requirements of brut and its artists and do not restrict our working processes. As of now, we are still fighting for ideal conditions.

Since the reconstruction work has started, we have been in negotiations with the new Künstlerhaus Besitz- und Betriebsgesellschaft (KBBG, the Künstlerhaus ownership and operation association) regarding

- the necessary reconstruction measures for the theatre and the associated costs

Around this New Year, we were informed that measures required to meet current building laws have increased the reconstruction costs from about two million euros to more than five million euros. While the original two million were borne by the City of Vienna and brut itself, the new costs for reconstruction have not been covered yet. In parallel, while we have started to work on the terms of a future use with the lessor, the KBBG (74% Haselsteiner Familien-Privatstiftung and 26% Gesellschaft bildender Künstlerinnen und Künstler Österreichs), not all critical points have been resolved. For example, we are adamant that brut’s freedom regarding its programming and professional conditions for rehearsals and performances of art projects be guaranteed for the decades to come. The enormous cost increase by three million euros combined with the unresolved terms make it extremely difficult to answer the question of whether or not to remain at Künstlerhaus. The owner and lessor, KBBG, does not want to bear the additional costs. Also, it is impossible to procure an amount like this from the regular brut budget. Altogether, a five-million-euro investment in a rental property that cannot guarantee ideal conditions for its intended use may well be taken into question.

In early 2019, we took up talks with the federal government regarding the exploitation of the former TBA21 area at Augarten. Since then, these premises have already served as a successful venue for the 30-year anniversary of the imagetanz festival in March 2019. The response from artists, audiences, the team and the press was extremely favourable, and it is fair to say that an alternative equal to the Künstlerhaus has opened up. The federal government’s deliberations regarding the ultimate allocation of the property are still in process. We have placed our genuine interest and are in continuous dialogue. In addition, we are constantly pursuing other options as well; however, no tangible alternatives have presented themselves yet.

In this entire process, brut, being one of the “City’s theatres”, makes sure to act in close coordination with the city councillor’s office and the City of Vienna’s Department of Cultural Affairs. There is a general agreement among these agents that the co-production theatre brut needs—and will get—a centrally located, professionally equipped venue as a basis for its production work. brut has received active support from the City in this process over the entire time.

What happens in the meantime?

Like in the past two seasons, we will co-produce independent art projects at studio brut and, more than we used to, at varying venues and theatres. It is and has been shown that brut can work with the independent scene in Vienna quite successfully even without its own theatre and despite all resulting adversities. Our number of co-productions is the same as usual, but we have more active days and are finding that the audience increases. brut has remained a strong and reliable partner to the independent performing arts in Vienna—which was only possible, however, by putting in a high level of hard work and improvisation that is hard to keep up on the long run. This is why, sooner rather than later, we need our own building at a central location again as an institution and for our artists. We will continue to fight for that with all our power.

On that note, we not only ask for your patience but also hope for your support regarding all the challenges in store for us.